A grill master decided to risk it with their choice of sausage ingredients in a bid to take out this year's top Kiwi snag award.

It paid off too - Auckland's Westmere Butchery has been dubbed sausage king for the second year in row.

This year leaving the judges wanting more of their tasty Chicken, Leek and Bacon banger.

Not an easy task as more than 500 other entries were grilled from over 90 butcheries around New Zealand in a fight for the supreme snag status. The snarlers were poked, sniffed and gobbled before a final decision could be made.

In the end, Westmere Butchery was announced the Supreme Award winner for the 2019
Devro Great New Zealand Sausage Competition at an awards dinner in Auckland this
evening.

Westmere Butchery owner David Rossiter has more than 45 years in the industry and it is fair to say his store has Kiwi snag-lovers' jaws dropping.

Rossiter said it was just fantastic to win again for a second year and he could only thank his manager Glenn.

"He's picked the winning sausage two years in a row. It's brilliant that we're making a great sausage that people enjoy.

"I've got the best team in the world and I'm so pleased they're getting the recognition they deserve. I hate to say that I'm gobsmacked, but I'm bloody gobsmacked," Rossiter said.

"The top sausage is an extraordinarily delicious, full-bodied savoury sausage that had all the judges fighting for more, but all were in total agreement that this was the winning banger," food writer and judge Annabelle White said.

She said after all the judging they asked for more to be cooked.

"Think perfectly flavoured - it's all about the meat, perfectly textured with great use of seasoning that has an unforgettable luscious after taste. It's made me banger obsessed and congrats to the creators." 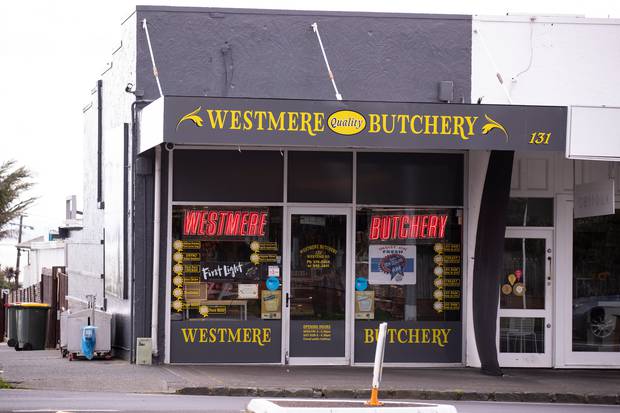 The Westmere Butchery takes out the supreme status for best snag in New Zealand for the second year running. Photo / Dean Purcell

The announcement comes as next week's long weekend also happens to be The
Great New Zealand #SausageFest – a weekend to celebrate the sausage.

Keep your barbecues sizzling New Zealand, there are plenty of snags to go around.

Other winning categories were the People's Choice Award which, after a public blind-taste test of the six top scoring sausages, revealed Avon's Butchery in Glen Innes to be the favourite with their Beef, Garden Herb and Garlic entry.