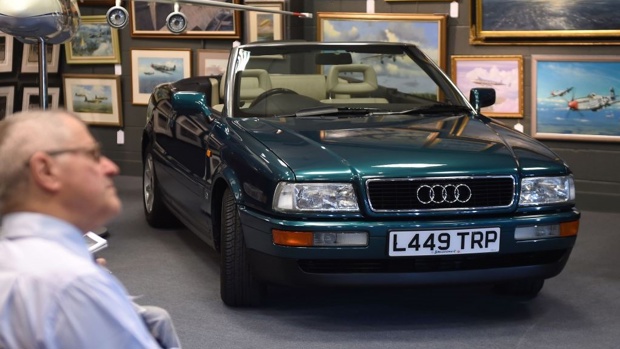 After the whole ‘Megxit’ and Prince Andrew fiasco, fans of the British Royal Family aren’t celebrating much as we head into 2020.

This could be set to change as Princess Diana's iconic 1994 Audi 80 Cabriolet is coming up for grabs in a collectors' auction at the end of March in England.

This specific convertible was the late Princesses car of choice during her time in the spotlight, and quickly became one of the most photographed car during that period.

It was later revealed that Audi doubled its sales of that particular model after Diana was seen driving it with William and Harry in the back.

While it's the celebrity status of the Audi that will gather the crowds, the car itself is in incredible condition for its age, as we can't imagine that it has ever missed a service, or lived outside.

In its 26 years on the road, this car has covered just 35,000 kilometres, but you wouldn't be able to tell looking at the interior.

Unlike Harry's taste in high-performance Audis, his mother wasn't planning to break any speed limits with a naturally-aspirated 2.3-litre engine under the hood producing just 97kW.

After its time in Diana's possession, the car was sold to an English television presenter before changing hands multiple times, and being traded through different collections.

“This is a stunning car, one that is remembered by many of us of a certain age at the height of the Princess popularity,” a member of the auction house said.

If you're looking to add this gorgeous drop-top Audi to your collection, current estimates for the final price are sitting around $70,000. While this is a fair bit to pay for a 26-year-old mid-spec Audi, it's a fair price to pay for a piece of history like this.

This article was originally published by Driven and reproduced here with permission.