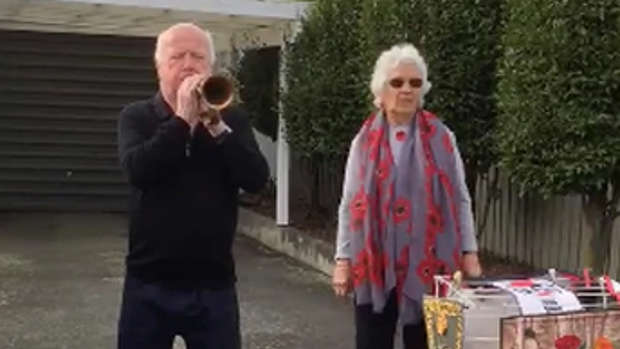 Over the weekend, aged 80, Peter Cullimore dusted off his trusty bugle and performed a beautiful rendition of the Last Post from his driveway to honour New Zealand's fallen heroes on Anzac Day.

The Timaru man was diagnosed with dementia about 15 years ago and, since then, the disease has taken a lot from him - but it hasn't taken his pride for his country and his ability to honour those who gave their lives for us.

Although his short-term memory now often betrays him, he has not forgotten what he learned in the Timaru Main School Bugle Band a good 70 years ago.

And his daughter, Tracey Cullimore, could not have been prouder.

"Love you always dad, always my hero," she wrote on Facebook alongside the video of her father's Anzac performance.

She told the Herald her dad's dementia has been linked to lead poisoning from his radiator business 40-odd years ago. Back then, "he had to have a blood transfusion because they said he only had three months left to live", she recalls.

"His short memory is stuffed and even last night he asked me when Anzac Day was," she added.

"He can't do a lot now but knows all the family and where he lives and doesn't wander and is very placid."

Peter has been in self-isolation with his wife, who is also his caregiver. Tracey lives five minutes away but, as she is not in their bubble, has been keeping in touch via phone a lot.

His Last Post rendition has been viewed more than 18,000 times since his daughter shared it on Facebook.