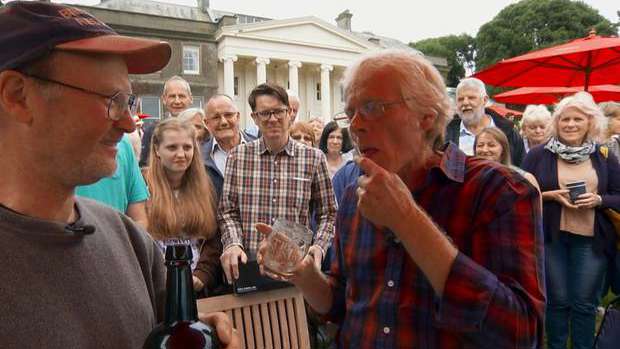 When you find a sealed bottle from the 19th century, the last thing you would expect to find inside is urine.

But that's exactly what happened to one expert on Antiques Roadshow after he thought he was drinking port.

Glass specialist Andy McConnell inspected the 150-year-old bottle - which was found buried under the threshold of a local man's house - on the BBC show and decided to sample its mystery contents in front of a live audience.

As he sipped at the mystery beverage, he said: "It's very brown.

"I think it's port. It's port or red wine, or it's full of rusty old nails and that's rust."

But presenter Fiona Bruce later had unfortunate news for McConnell, telling him that expert analysis at Loughborough University of the "very brown" liquid revealed it to be an unwanted vintage.

She said: "You thought it might be port or wine. That would have been nice. Inside were these brass pins."

Before she announced that the liquid was antique "wee", which was mixed up and buried by the front door of the house to guard against evil spirits.

"The liquid: urine, a tiny bit of alcohol, and one human hair," she continued.

"What this was was not a bottle of port or wine, but a witch's bottle, buried in the house as a talisman."

McConnell said well-wishers had previously enquired about his health after he quaffed the mystery liquid, before revealing he did it because: "I was always the naughty boy at school. It was too good an opportunity to miss."

Each to their own we guess!