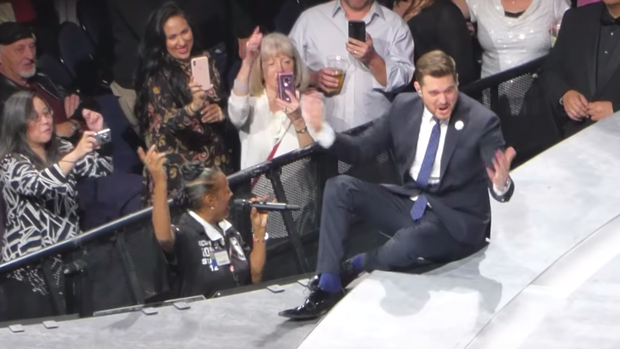 One lucky security guard has just had all her dreams come true; as she got to sing for the one and only Michael Bublé!

Anitra Lewis, from Oakland, tore the roof off Bublé's Oracle Arena show after the 'Haven't Met You Yet' singer passed the microphone to her.

Performing the Etta James classic 'At Last,' Lewis blew Bublé and the crowd away with her soulful rendition of the song.

Omfg this just happened at the @MichaelBuble concert! (I had to trim it) YO- @OracleArena you’ve got a superstar employee! pic.twitter.com/fUZV7ZhjvR

"That was so beautiful," Bublé told her after she handed back in the microphone.

Back in March the 43-year-old singer also invited Nicole Zahn to sing 'Hallelujah' one-on-one with him for an unforgettable duet during his concert in Buffalo.