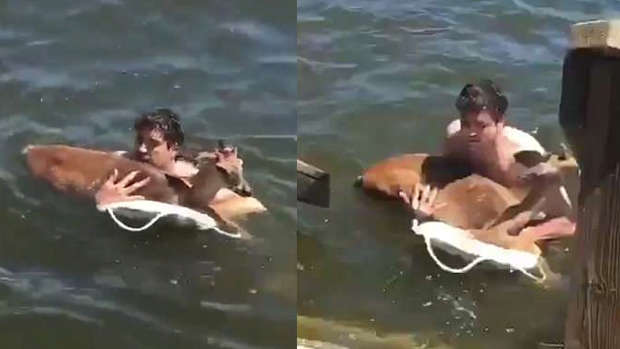 A heartwarming video shows the moment a Texas man jumped into a lake to save a drowning deer.

The Montgomery County Precinct 1 Constable’s Office responded to a call about a deer needing to be rescued from Lake Conroe Sunday morning.

When they arrived to the scene, a resident had already jumped into the lake to save the helpless deer.

The man is seen holding the male deer along with a lifebuoy as he swims to the steps of a pier. Authorities are then seen trying to help the man get the deer up the steps.

'Put her feet on the stairs and let her go if she has the energy left,' one officer is heard telling the resident.

As the man tries to put the deer on the steps, he realizes that there were steps missing.

An officer then lifts the deer up, carries him to the grass and places him down gently.

'He's going to need a little rest,' the hero resident is heard saying as the deer struggles to stand.

'We're going to give you some space buddy,' an officer says while the deer lies on the grass.

Moments later, the deer is seen standing up on all four legs as he wobbles around.

The deer walks a couple of feet before plopping back down on the grass.

'Take your time buddy,' the officer tells him.

Police said the cute deer eventually regained enough energy to be on his way back into the woods.

Constables Lieutenant Tim Cade reminded people visiting the lake to stay alert and keep their eyes open for people and wildlife struggling in the water.