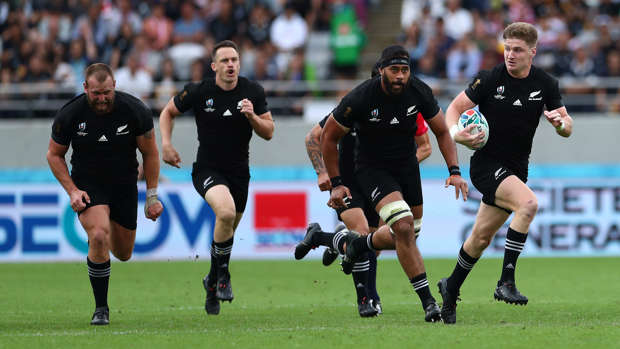 Brodie Retallick says losing a child prematurely is something he will never forget - and the tragedy has changed his perspective on life.

The great All Black lock, who played his first 2019 World Cup game against Namibia last weekend, also revealed the fears he had over the injury which threatened his participation in the tournament.

Retallick and his wife Niki gave birth to a daughter a year ago, a year after losing a baby boy prematurely.

Retallick took a break from the game at the time to be with his family.

"We already had one daughter before then so it had a big impact on us," Retallick told Sky Sport.

"It's easy to get caught up in this environment that rugby's the be-all and end-all but we're all humans outside of this team and everyone's got things going on.

"Some things that might have seemed like a big problem before then are not so big anymore and you just carry on and move on."

It also caused a pinched nerve and subsequent numbness in his fingers and arms. That put doubt over how long it would take to heal.

"That was what the real uncertainty was about really is when the function of those muscles and fingers were gonna come back.

"The one thing that no-one could tell me when it was gonna come right. With a nerve, it's not like a bone where they can say you know it's six or eight weeks ... the scary bit about it was there was a chance that I could be sitting at home now with it still there."

Retallick found out about his World Cup selection when the team was publicly announced.