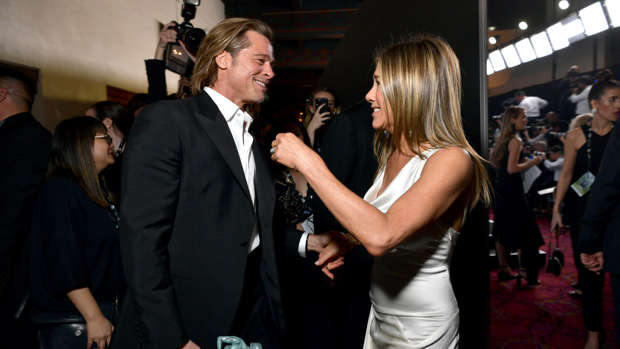 Yesterday marked the 65th Screen Actors Guild Awards ... but instead of all the attention being on the big winners of the night, Brad Pitt and Jennifer Aniston sent the internet into a frenzy, as hopeful fans looked for signs the former husband and wife had rekindled their iconic romance.

The Once Upon a Time in Hollywood star and his ex-wife - who tied the knot in 2000, before divorcing in 2005 - set tongues wagging when they reunited on the red carpet at the star-studded bash in Los Angeles.

Photos from the moment showed the pair sharing a sweet kiss on the cheek, whilst the 56-year-old actor held onto the former Friends star's hand. But their interactions didn't end there.

The pair also looked on with admiration for each other when they gave their respective speeches. As Brad, who scooped Outstanding Performance by a Male Actor in a Supporting Role for his work on Once Upon a Time in Hollywood, gave his acceptance speech Jennifer could be seen beaming from the audience.

And when it was time for the 50-year-old actress to pick up her award for Outstanding Female Actor in a Drama Series for The Morning Show, Brad was filmed watching her speech from a television screen backstage.

Of course, the sweet moment is probably just a picture of two winners celebrating together at an awards show, but that didn't stop Twitter going into overdrive with fans analysing every second of their encounter.

"Seriously, Quentin has separated more women from their shoes than the TSA." Brad Pitt is full of quips as he accepts the #SAGAwards statue for best supporting actor in a film https://t.co/duqdI5q1az pic.twitter.com/Kb1kL0LqR6

While another tweeted: "I am way too excited and giddy about Brad and Jen having multiple cute moments at the SAG Awards. I can't help it."

The pair were married for five years in what many deemed a fairytale Hollywood union. After their split, the Ocean's Eleven star began dating Angelina Jolie, to whom he was married between 2014 and 2019.

Both Brad and Jennifer are currently single, following their respective separations from Angelina and Justin Theroux.