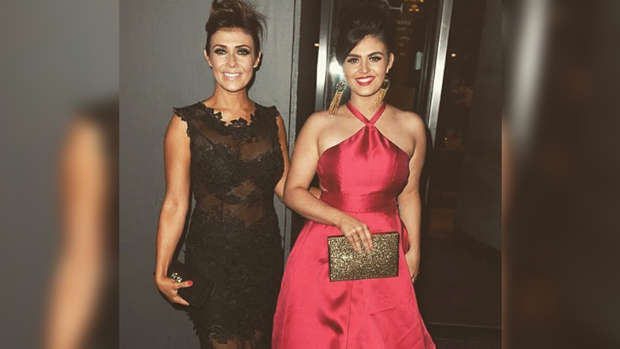 Kym Marsh has played Michelle Connor on Coronation Street for twelve years now, and has won numerous awards for her role on the hit UK drama.

The star famously had her first son David at 19, and then had her daughter Emilie at 21.

21 years ago today I was lucky enough to become a mummy to the most beautiful girl in the world. @emilieecunliffe.x from the second I held you in my arms and looked at your tiny little face I was completely in love with you. You were always such a gorgeous little girl, the biggest brown eyes in the world, a smile that would melt the coldest of hearts and an ability to make people laugh at the drop of a hat. Those things haven’t changed. You still have the most beautiful eyes I’ve ever seen, the most gorgeous smile and you make me laugh like no one else I know! You have grown into an incredible woman and I couldn’t be more proud of you. I think god every day for you. I am so very lucky to be your mumsy. Happy happy birthday you beautiful beautiful girl. I love you always and forever. 💖💖💖

Now Kym is celebrating being a grandmother at 42, and couldn't be happier about it.

A few days ago Kym's daughter revealed the gender of her baby in a post that Kym shared to her Twitter account with the caption: "It's a boy!".

Kym has also revealed that she isn't a fan of the name Grandma, and has been looking into some possible alternatives.

"I'm looking forward to being a young grandmother," she told OK!

"I've always looked forward to having grandchildren. Although I'm not relishing being called Grandma so I've been researching alternative names!

"I know what it's like to be young and pregnant – it's scary, but Emilie will be a great mum."