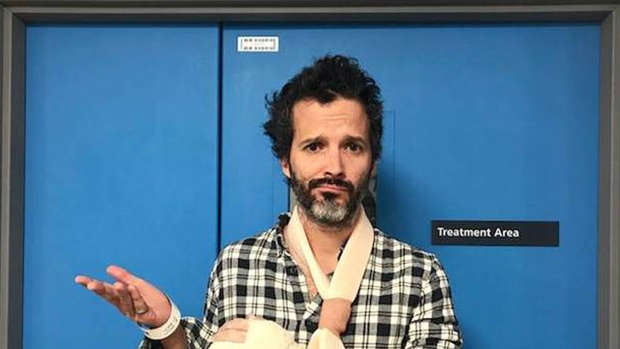 Flight of the Conchords have been forced to postpone their UK tour after Bret McKenzie suffered a hand injury.

The Kiwi comedy duo are on tour in the UK, where they have received rave reviews for a set containing mostly new material.

But one half of the folk-comedy duo, Bret McKenzie, took to Facebook to say the tour's been postponed because he's broken his hand.

McKenzie explained that he fell down some stairs and can't perform for "several weeks".

"Unfortunately I've broken two bones in my hand today in a very rock 'n' roll injury - falling down some stairs," he wrote.

"The doctors have informed me that I won't be able to perform for several weeks. I'm sorry not to be able to do these upcoming shows but I'm looking forward to coming back and finishing the tour when I have two fully functioning hands."

The injury affects 13 dates across the UK in March and April, including shows in London, Dublin, Glasgow, Liverpool and Leeds.

Ticketmaster apologised for the cancellation of the shows.

"Bret and Jemaine are extremely sorry and deeply saddened that they cannot perform for their UK fans, who have waited so patiently.

"Tickets holders will be contacted about the rescheduling of dates. More information to follow."

McKenzie and his Conchords partner Jemaine Clement have received rave reviews for their tour, which has seen them debut several new songs.

"The pair prove with plenty to spare that when it comes to silly and sophisticated comic songwriting, there's still no one to touch them," wrote critic Brian Logan from The Guardian.

"Flight Of The Conchords playing mostly new material, at times hilariously shambolically, in a tiny room, accompanied by a one-man New Zealand Symphony Orchestra. I had a smile on my face the entire time."

The pair have confirmed they're working on a one-off TV special of Flight of the Conchords for HBO in America.