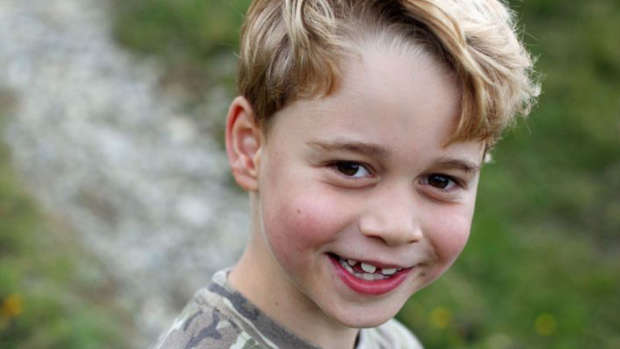 In celebration of the young royal's seventh birthday today, the Duke and Duchess of Cambridge have released two new photos of their eldest son - and he is one handsome young man.

Sharing a 📸 taken by The Duchess ahead of Prince George’s seventh birthday tomorrow! 🎈

The sweet snaps show the little prince flashing a gap-toothed smile as he stares into the camera.

According to the royal's official Instagram account, the photos - which were shot by Kate Middleton - were taken last month. The images are likely to have been taken at their Norfolk residence Anmer Hall.

Wearing a dark green polo shirt with his hair neatly brushed in one photo and a t-shirt with a camouflage pattern with tousled hair in the other, the birthday boy is looking so grown up.

"The Duke and Duchess of Cambridge are delighted to share two new photographs of Prince George ahead of his seventh birthday tomorrow," reads a caption from Kensington Palace, which was released alongside the photo on social media.

Prince George Alexander Louis of Cambridge was born in the private Lindo Wing of St Mary’s Hospital in London in July 2013 and made his first public appearance a day later, when his parents stood on the hospital steps in front of a huge crowd of photographers and camera crews.