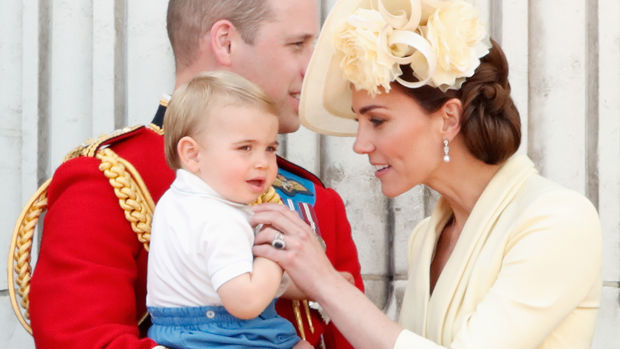 While he's not even two years old yet, it seems Prince Louis has already developed a love of music.

Following Kate Middleton and Prince William's reunion with Meghan Markle and Prince Harry at the Commonwealth Day service, the royal mum-of-three hosted a reception at Buckingham Palace to celebrate the 25th birthday of Place2Be, a mental health charity that supports children and young people.

While at the event, the Duchess of Cambridge got chatting to some of the students from two local schools, who had teamed up with the Royal Philharmonic Orchestra to perform an original song for her as part of the evening's festivities.

🎂 Happy 25th Birthday @_place2be — here’s to many more! The Duchess of Cambridge, Patron since 2013, hosted a reception at Buckingham Palace to celebrate the charity’s incredible work over the past 25 years. No child or young person should have to face mental health problems alone — and that has been the founding mission of Place2Be, whose teams across the UK have provided mental health services in schools. Speaking at this evening’s reception, The Duchess said: “Having visited many of your schools, meeting hundreds of your wonderful staff, children and young people, it is heart-warming to see that the support you provide is so much more than just being there in a time of desperate need”. #25yearsofplace2be

While speaking to the choir members, Catherine learned that two of the young performers were celebrating their birthdays which led her to joke that it should be her singing to them 'Happy Birthday' instead.

The 38-year-old then went on to reveal that the classic tune is in fact "one of [Prince] Louis's favourite songs."

Luckily for little Louis, he will get to hear the song next month as he celebrates his own birthday on April 23.

The young royal - who hasn't been seen in public since Queen Elizabeth's annual Christmas lunch in December - couldn't be at the reception himself to enjoy their music, as he was already "tucked up in bed."