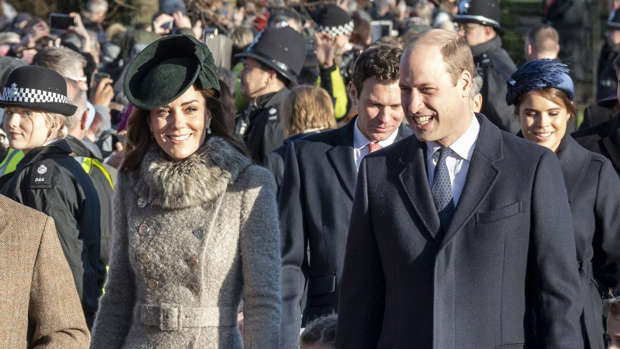 And this year's walk was extra special, as Prince George and Princess Charlotte made their public debut, joining their parents on the famous walk for the first time.

Ahead of the two children's big walk, Kate Middleton took to Instagram to share a sweet new black-and-white photo of George, six, Charlotte, four, and 19-month-old Prince Louis posing with their dad in Norfolk.

🎄 Merry Christmas! This photograph of The Duke of Cambridge, Prince George, Princess Charlotte and Prince Louis was taken by The Duchess of Cambridge in Norfolk earlier this year. We wish all our followers a very happy and relaxing Christmas Day ⛄️

"We wish all our followers a very happy and relaxing Christmas Day," the palace captioned the picture.

But it was Charlotte who later stole everyone's heart as she arrived at St Mary Magdalene Church. The little royal looked adorable wrapped up in a warm festive emerald green coat, as she waved to the crowd of well-wishers waiting on the premises of the chapel.

At the end of the service, the young Princess even gave a few hugs to royal fans who had gathered to catch a glimpse of the family. While George, who wore a dark blue blazer and jumper, appeared to be more anxious holding on tightly to his father's hand.

As for their youngest sibling, Louis stayed at home with Kate's parents, Carole and Michael Middleton. This year the Duke and Duchess of Sussex and baby Archie skipped Christmas at Sandringham to spend the holidays with Meghan's mother, Doria Ragland in Canada.