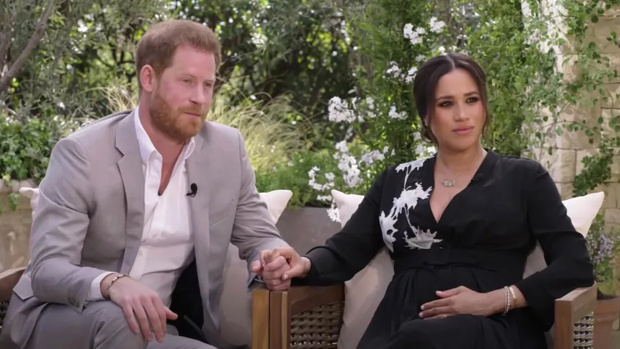 Prince Harry and Meghan Markle have revealed they're expecting a baby girl!

Speaking during their interview with Oprah Winfrey, the Duke of Sussex announced: "It's a girl."

When Winfrey asked about his reaction, Harry added: "Amazing. Just grateful. To have any child, any one or two, would be amazing. But to have a boy and then a girl, what more could you ask for? Now we’ve got our family, the four of us and our two dogs. it’s great."

The Sussexes announced the exciting news their family was expanding on Valentine's Day.

"We can confirm that Archie is going to be a big brother," a spokesperson for the couple said at the time. "The Duke and Duchess of Sussex are overjoyed to be expecting their second child."

The news was announced with a stunning black-and-white photo taken by their friend and photographer, Misan Harriman.

Harriman snapped the image of a smiling and barefoot Meghan remotely on an iPad.

Meghan could be seen cradling her baby bump in a flowing dress, by Carolina Herrera, one she previously wore when pregnant with Archie.

The extra special news comes after the royal couple revealed they suffered a heartbreaking miscarriage in July last year.

"Losing a child means carrying an almost unbearable grief, experienced by many but talked about by a few," Meghan wrote in a moving New York Times essay about her experience on November 25.

Meghan and Harry officially stepped down from their roles as senior royals last year.