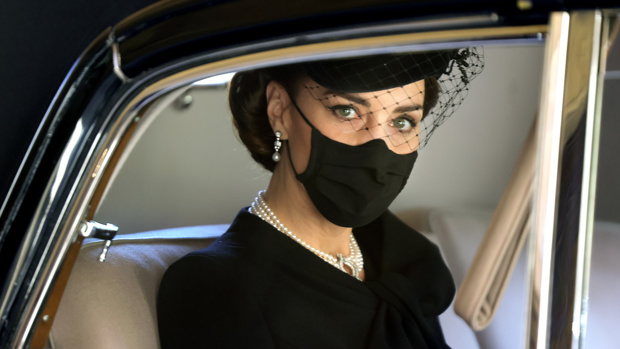 Kate Middleton paid a touching tribute to Princess Diana and The Queen at Prince Philip's funeral by wearing Her Majesty's pearl choker, which was previously lent to Diana in 1982.

The Duchess of Cambridge's pearl-and-diamond necklace stood out alongside her all-black outfit as she arrived at Windsor Castle with her husband Prince William.

The Queen often wore the pearl and diamond necklace in the 1980s, but gifted her four-strand choker to Princess Diana for a state banquet in the Netherlands in 1982.

She finished her outfit with a chic black hat with netted detail around the front.

It wasn't Kate's only shining moment. She reportedly played a part in helping William and Harry reunite for the first time in more than a year.

The brothers were seen standing side by side as they spoke to the Archbishop of Canterbury after Prince Philip's funeral.

Kate, perhaps acting as mediator, was seen speaking to her brother-in-law as the trio walked away together after the service.

She then joined Sophie Wessex so Harry and William could walk together. The brothers appeared deep in a private chat as the royals headed to the wake, taking their first steps towards rebuilding their relationship.

The brothers have not seen each other in more than a year and walked separately in the procession behind Prince Philip's coffin.

The Duke of Sussex's relationship with the rest of his family, including William, has been strained ever since he and his wife Meghan Markle decided to step back from their roles as senior working royals last year.