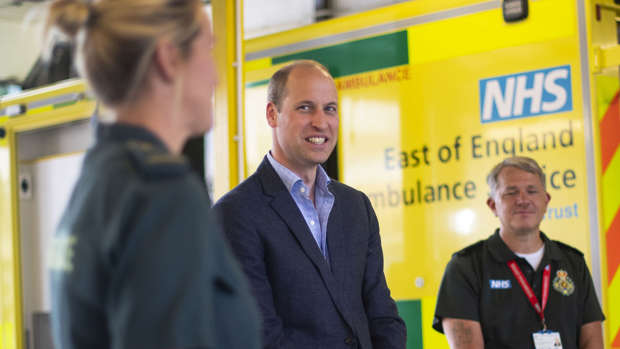 Prince William has made his official return to royal duties for the first time in three months.

The Duke of Cambridge - who has been isolating with his wife, Kate Middleton, and their three children, Prince George, Princess Charlotte, and Prince Louis, at their Anmer Hall home since the start of the global pandemic - ventured out for a visit to the King's Lynn Ambulance Station at the Queen Elizabeth Hospital.

During the socially distanced visit, the 37-year-old thanked ambulance crews for their dedication and work in responding to the COVID-19 outbreak.

Thank you to the staff of Kings Lynn Ambulance, Queen Elizabeth Hospital for welcoming The Duke of Cambridge to their ambulance station, and sharing so candidly their experiences over recent months in responding to the COVID-19 outbreak. The Duke heard from the crew about their impact on mental health and wellbeing, the support they have received from members of the public and local businesses, as well as help from volunteering networks. The England Ambulance Service Trust (@EastEnglandAmb) provides round-the-clock accident and emergency services to 6.2 million people living in the East of England, operating over 130 sites and working closely with other blue lights partners to ensure that every patient receives the best possible care. In April this year, The Duke and Duchess of Cambridge supported the launch of @ourfrontlineuk, an initiative that was created to provide round-the-clock mental health and bereavement support to frontline staff and key workers.

On his arrival at the ambulance station, the Duke passed a COVID-19 temperature test and washed his hands before stopping himself from shaking hands with the hard-working staff.

He said: "I'm still fighting the urge to shake hands. I'm keeping my hands by my side."

The Prince was told how the East of England Ambulance Service Trust had been able to continue providing round-the-clock accident and emergency services to 6.2 million people with support from other "blue lights partners" including air ambulances.

The service, which operates over 130 sites, had also been supported by members of the public, local businesses and volunteering networks during the crisis.

Meanwhile #PrinceWilliam has been at King’s Lynn Ambulance Station today to thank staff for their dedication and to hear more about their experiences. He and Kate have launched Our Frontline to provide metal health support for frontline staff and key workers. pic.twitter.com/TGI2vlm6cP

William told the workers that he had enjoyed the weekly Clap For Carers campaign during lockdown, calling it a "powerful initiative."

Before leaving the station, the father-of-three thanked paramedics working from their families for their "sacrifices" and for all their hard work.

During the lockdown, the Duke and Duchess of Cambridge have been conducting virtual meetings via Zoom while homeschooling their children.