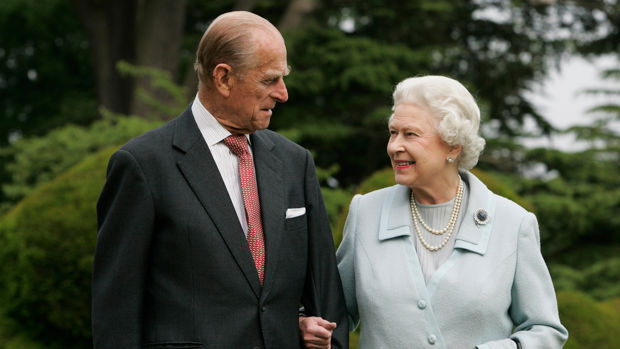 After 73 years of marriage and a loving union that saw her husband often by her side or two steps behind, Queen Elizabeth II has received an incredibly touching gift in honour of Prince Philip's 100th birthday today.

The 94-year-old monarch was gifted a beautiful newly bred 'Duke of Edinburgh' rose, that has since been planted in the East Terrace Garden below her private rooms at Windsor Castle.

Her Majesty described the Duke of Edinburgh rose - which is deep pink, dappled with white lines and double-flowered - as "lovely" and the tribute as "very kind".

The Queen received the poignant gift from the Royal Horticultural Society.

RHS President Keith Weed told the Queen: "It's a rose named the Duke of Edinburgh Rose to mark his centenary and it's a commemorative rose for all the marvellous things that he did over his lifetime and for everyone to remember so much that he did."

The Duke of Edinburgh Rose was newly bred following the Duke's death on 9 April by Harkness Roses, which has been breeding and growing British roses since 1879.

For every rose sold, the firm will donate £2.50 to The Duke of Edinburgh's Award Living Legacy Fund, which will help one million more young people from all backgrounds and circumstances take part in the youth award scheme set up by Prince Philip in 1956.

Prince Philip spent the last year of his life residing with the Queen at Windsor Castle.

Philip passed away peacefully on April 9, at the age of 99, leaving behind four children, eight grandchildren and 10 great-grandchildren.