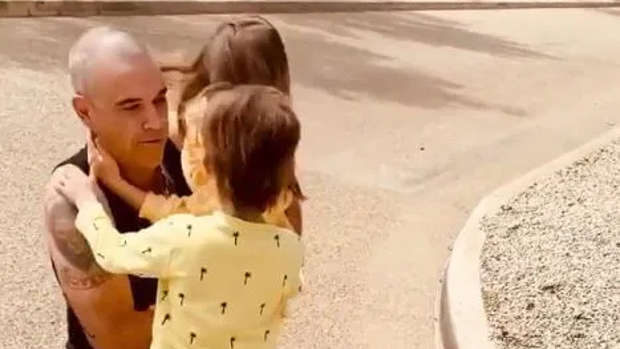 Robbie Williams has finally been reunited with his children after spending three weeks away from his family self-isolating.

In the sweet clip, the couple's eldest children, seven-year-old daughter Teddy and five-year-old son Charlton, can be seen running towards their dad as he walks up the driveway of their Los Angeles mansion.

@robbiewilliams After 3 weeks...REUNITED!!!! So happy to have daddy home after separate quarantines #togetheratlast #quarantinelife #stayhome AWxx

As soon as they spotted their father, the kids can be heard shouting "daddy" as they sprint towards him.

Teddy later says: "Daddy I’ve missed you so much."

Alongside the post, Ayda - who welcomed her fourth child with Robbie on Valentine's Day - wrote: "After 3 weeks...REUNITED!!!! So happy to have daddy home after separate quarantines #togetheratlast #quarantinelife #stayhome AW xx."

Robbie was in self-isolation as a precaution after he returned from a trip to Australia.

The 'Let Me Entertain You' hitmaker, was forced to cancel his concert in Melbourne after the Australian government stated that gatherings over more than 500 people had to be cancelled.

Last month, Ayda announced the birth of Beau Benedict Enthoven via the same surrogate who carried their 15-month-old daughter, Coco.