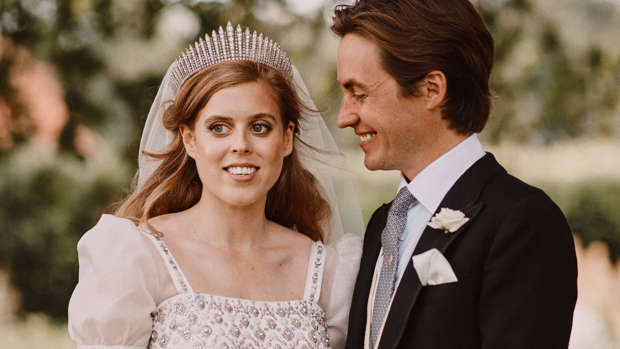 Over the weekend, Princess Beatrice secretly exchanged vows with property tycoon Edoardo Mapelli Mozzi, after they were forced to cancel their wedding due to the coronavirus pandemic.

And it has now been revealed Queen Elizabeth gave her granddaughter - who's ninth in line to the throne - an extra special present ahead of the nuptials.

Not only did the 94-year-old monarch give the 31-year-old bride her blessing for the couple to marry in a private Windsor ceremony, but she also lent Beatrice a vintage ivory taffeta gown to wear and the diamond Queen Mary tiara she wore on her own wedding day in 1947.

Designed by British couturier Sir Norman Hartnell, the ivory gown is made from Peau De Soie taffeta and features a square neckline and organza puff sleeves.

The evening gown - which is encrusted with diamante and has a geometric checkered bodice - was first worn by Her Majesty in the '60s. She wore it on at least two occasions, including in 1962 at the world premiere of the film Lawrence of Arabia and at the State Opening of Parliament in 1967.

Angela Kelly, the Queen's senior dresser, and designer Stewart Parvin helped to remodel and fit the dress to Princess Beatrice's measurements, adding sleeves and choosing to forgo the voluminous skirt.

A statement released by the palace on Saturday announced: "The private wedding ceremony of Princess Beatrice and Mr Edoardo Mapelli Mozzi took place at 11am on Friday 17 July at The Royal Chapel of All Saints at Royal Lodge, Windsor.

Princess Beatrice wore a vintage dress by Norman Hartnell and the Queen Mary diamond fringe tiara, both belonging to Her Majesty The Queen.

The tiara was worn by Her Majesty on her wedding day in 1947. pic.twitter.com/LEXLdsSlW1 "The small ceremony was attended by the Queen, the Duke of Edinburgh and close family. The wedding took place in accordance with all relevant government guidelines."

Under the current UK government guidelines, weddings with up to 30 guests can still take place amid the lockdown restrictions and it is understood the couple had around 20 guests present.

The Royal Chapel of All Saints - which is situated in the grounds of Prince Andrew and Sarah Ferguson's home of Royal Lodge - can accommodate 180 people so there was ample room for social distancing among the guests.

Beatrice and Edoardo are long-time family friends, who started dating in October 2018.

The newlyweds had been together for 11 months at the time they announced their engagement in September last year. Father-of-one Edoardo proposed with a ring estimated to have cost £100,000, while the pair were holidaying in Italy.

They were due to wed in May but their wedding was postponed due to the Covid-19 pandemic.

Edoardo is the son of former Olympic skier Count Alessandro Mapelli Mozzi and Nikki Shale and has son Christopher, with his former partner Dara Huang.

It was previously reported that Christopher - who is also known as Wolfie - was set to take on the prestigious role of best man at the nuptials as they wanted to show that he is "loved and embraced by his stepmother".