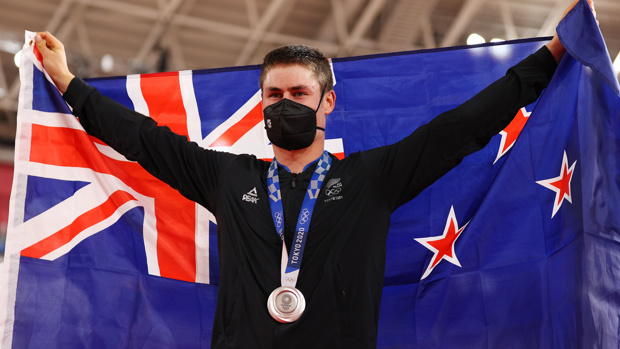 Less than 48 hours ago, Campbell Stewart's Olympics were meant to be over.

The 23-year-old Kiwi cyclist claimed a stunning silver in the men's omnium last night, pulling off the most improbable of comebacks on the final lap of the final event.

But he wasn't even supposed to be in the event.

Stewart replaced the New Zealand selectors choice of Aaron Gate in the omnium after Gate was ruled out of the rest of the Olympics after coming off his bike at 66km/h - shredding the skin off his right shoulder and breaking his collarbone - on Wednesday night during the men's pursuit bronze race.

Following the race, Stewart paid tribute to Gates, saying it was his teammate who gave him extra motivation.

"Yesterday... the boys... it was tragic," Stewart told Sky last night, as Gates wandered across to join him midway through the interview, his arm in a sling.

"This just shows the team that we have. Gatey here went down yesterday. He was gonna be riding today and that's why I just had to do it for him."

According to Stewart, the vocal support from his teammates during the 100-lap climax to the Omnium was critical.

"I was riding by myself but, man, I could hear them, that's why I was able to pull it off," Stewart said.

"I had to do that for them. This man [Gate] threw it all down for us yesterday. He's got a broken collarbone but I tell you what, I couldn't have done it without him. He was out there with me tonight."