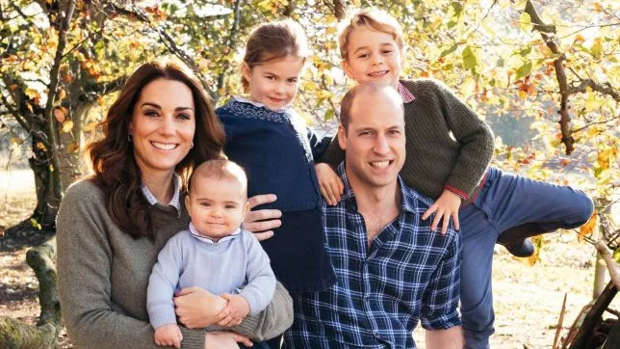 But while the royals are yet to publicly share the photos that will feature on their cards this year, Prince William and Kate Middleton's portrait has been leaked giving us a sneak peek at the beautiful family of five.

The Cambridge Household family Christmas card this year features The Duke and Duchess of Cambridge with their three children, Prince Louis, Princess Charlotte and Prince George on a motorbike and sidecar ❄️🎄 pic.twitter.com/pNg3zPJXqS

The picture - which shows the Duke and Duchess of Cambridge along with their three children Prince George, six, Princess Charlotte, four, and Prince Louis, one, gathered around a vintage motorcycle and sidecar – was shared on Twitter by Air Commodore Dawn McCafferty, who received the Christmas card from patron of the Royal Air Force, Kate.

William - who has a long love of two-wheeled machines and used to regularly ride a number of high-performance bikes, including a 1199cc Ducati, before he settled down - can be seen straddling the bike and holding Prince Louis, who is sitting in front of him, while Kate grabs one of the handlebars. Princess Charlotte is standing up in the sidecar and gripping its windscreen, while behind her is Prince George.

The printed message in the card - sent to friends, charities and organisations associated with the Cambridges - reads "Wishing you a very Happy Christmas and New Year".