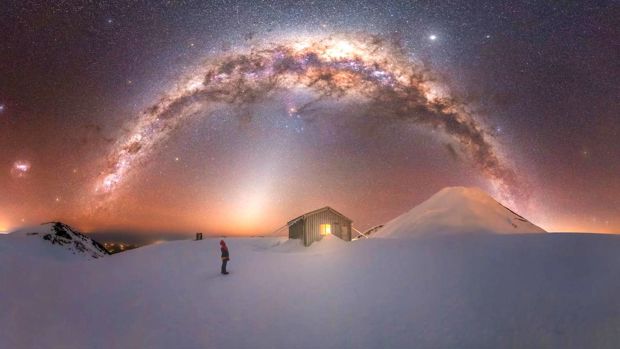 An Auckland-based photographer says he is over the moon after his picture of the Milky Way was selected as one of the best in the galaxy.

Larryn Rae said the image was one of the most challenging shots he ever captured.

Climbing to the top of Fanthams Peak on the side of Mt Taranaki in sub-zero temperatures, it took months of meticulous planning.

"It's a shot I've been wanting for a while, but I didn't have the mountaineering skills to achieve it," he said.

Last August, weather conditions and the stars aligned to produce the unique photo of our place in the universe.

The resulting image of Taranaki won a place on the 2021 Milky Way Photographer of the Year, alongside stellar images of mountaineers in the Italian Dolomites and the Namibian Desert at night.

The images of the red moon against the Milky Way are out of this world, and won't be replicable for decades.