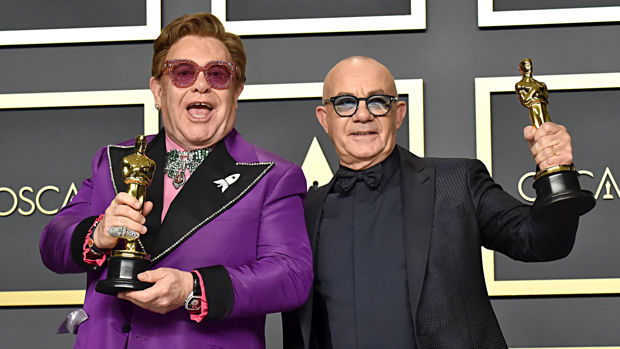 Sir Elton John believes he would be "nobody" without Bernie Taupin.

As the 73-year-old singer and his long-time songwriting partner scooped their first joint Oscar for Best Original Song for Rocketman's '(I'm Gonna) Love Me Again' during yesterday's Academy Awards ceremony, he gave a heartfelt speech in which he insisted he couldn't have achieved any of their success on his own.

Speaking at the Dolby Theatre in Los Angeles, Elton said: "This is for [Bernie].

"This is for my partner of 53 years. Without him, I wouldn't be here.

"He started the process. He gave me the lyrics that I got here. Without the lyrics, I'm nobody."

When the pair were announced as winners of the Oscar, the 'Candle in the Wind' singer admitted the award was a "dream".

He said: "Thank you to Bernie who's been the constant thing in my life, when I was screwed up and when I was normal.

"This is a dream for us - we've never been nominated for anything like this."

Elton also thanked his husband and their two sons during his Oscars acceptance speech.

Donned in a purple dinner jacket and bright pink sunglasses, he said: "David, I love you so much."

He added: "To my beautiful boys who are watching this in Sydney, how much do I love you? Daddy loves you."

Earlier in the night, Elton belted out the award-winning track with a vibrant performance behind a bright red piano.

I got to see my Uncle Elton tonight at the Oscars. Congrats on your win too, Sir! @eltonofficial pic.twitter.com/9HsQHvGzM4

This has been quite an awards season for John and Taupin as their song already won the Best Original Song award at the Golden Globes and a Critics' Choice Award.

Rocketman – which follows the early life and career of Elton John as he battled addiction – was released in 2019 to critical acclaim.