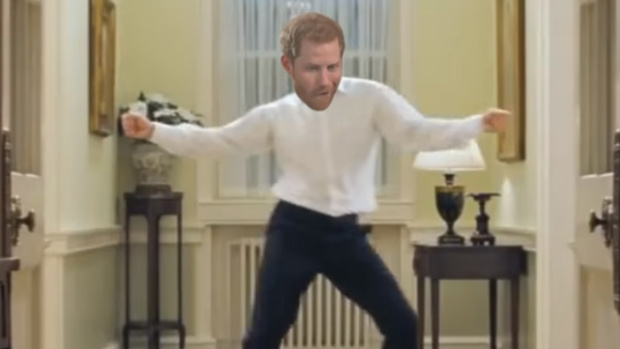 The moment we had all been waiting for finally arrived yesterday: The Duke and Duchess of Sussex announced the birth of their first child - a baby boy.

As Prince Harry and Meghan Markle settled into life as a family of three, royal fans in Windsor and around the world celebrated the newborn's arrival.

But one fan took celebrations to the next level when they decided to photoshop the new father's face onto Hugh Grant's body in his iconic Love Actually dance scene - and it is AMAZING!

The 34-year-old royal looked like the proudest dad in the world when he stepped out yesterday to announce the birth.

Grinning from ear to ear as he addressed media about his new baby, the dance is the perfect tribute to the proud dad.

The beaming Prince said: "I'm very excited to announce that Meghan and myself had a baby boy earlier this morning, a very healthy boy. Mother and baby are doing incredibly well. It's been the most amazing experience I could ever have possibly imagined.

"How any woman does what they do is beyond comprehension, but we're both absolutely thrilled and so grateful to all the love and support from everybody out there. It's been amazing, so we just wanted to share this with everybody."

This afternoon, His Royal Highness The Duke of Sussex shared the news of the arrival of his and the Duchess’ first born child. Their son was born early morning on the 6th of May, 2019 and weighs 7lbs and 3oz. Their Royal Highnesses thank you for your support and kindness during this exceptionally joyful time in their lives as they welcome their baby boy.

"As every father and parent will ever say, you know, your baby is absolutely amazing, but this little thing is absolutely to-die-for, so I'm just over the moon."