• Five confirmed dead, eight missing, 31 in hospital after White Island volcano erupts twice
• There were 47 people in total on the island, 38 of them were from the cruise ship Ovation of the Seas
• Police say there are no further signs of life on the island, following flyovers late on Monday

As the huge white cloud continues to billow from White Island's crater, new footage shows the extent of the eruption.

The videos, which were captured by rescue crews, show a chopper that appears to be damaged and half-buried in ash.

Tourists are also visible standing on the edge of a rock and ash-strewn landscape. 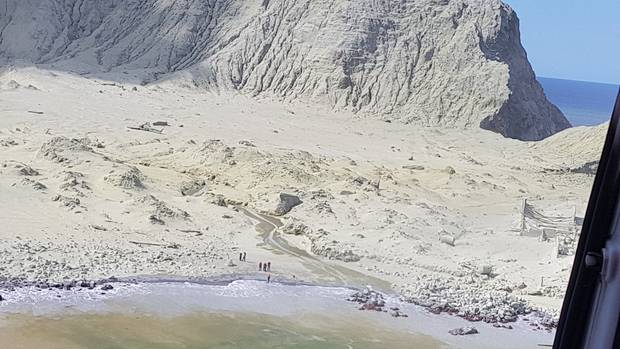 Police say there are "no signs of life" on White Island and they believe anyone who could have been taken from the island alive were rescued at the time of Monday's evacuation.

Prime Minister Jacinda Ardern said this morning the first responders from the Westpac helicopter, two private choppers and one Volcanic Air helicopter were "courageous", saying pilots made an "incredibly brave" decision to fly into such a dangerous situation.

One pilot had later spent about 45 minutes at the volcano carrying out a physical search, both aerial and on the ground.

He had been able to see some of those left on the island at the time of the eruption. There were no signs of life.