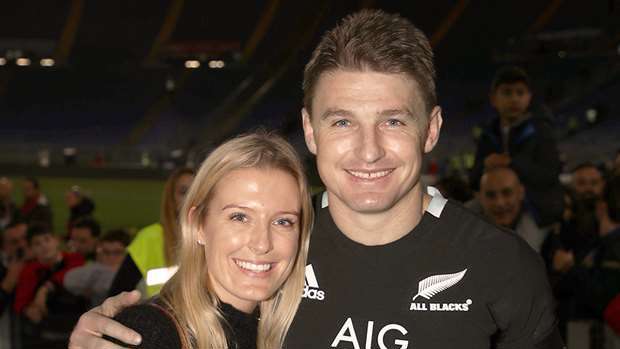 All Blacks and Blues star Beauden Barrett and his wife, Hannah, have welcomed their first child.

Billie Rose Barrett- our little princess 💙😍⁣⁣ Born 23/09/20. So proud of you @hannahlaity you were amazing 🙌🏼😘⁣ #FullHeart⁣⁣

Alongside a photo of Hannah and their newborn daughter, he wrote: "Billie Rose Barrett - our little princess 💙😍⁣⁣.

The new mum also took to social media to share a photo of her holding Billie's hand.

She captioned the post: "Welcome to the world little Billie Rose Barrett ❤️ you are an absolute superstar and your mum and dad love you so much x."

We’re expanding our bubble! Can’t wait to do parenting with you sweets @hannahlaity 😘⁣ #BabyBarrett #DueSeptember

The pair were married early in 2019, before moving up to Auckland later in the year. With the move, Barrett joined the Blues from the Hurricanes.

"Like a lot of Blues fans, I was getting really excited and already starting to think about playoffs and so on," Barrett told the Herald earlier this year. "Even the players were starting to realise their potential. They were showing a lot of self-belief and trust in each other and what Leon [MacDonald] and Tana [Umaga] were doing."