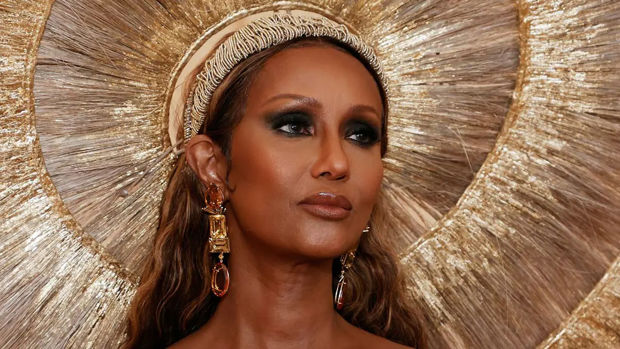 It's hard to stand out in a sea of celebrities wearing their most extravagant odes to American fashion, but at yesterday's Met Gala, David Bowie's widow Iman stole the show.

The supermodel pulled out all the stops, arriving at the Metropolitan Museum of Art looking like a goddess in an incredible design by Harris Reed – which included a large gold headpiece. The 66-year-old's headpiece, which was adorned with gold-painted feathers, was complemented with a matching hoop skirt cage.

The hollow skirt was layered over a strapless metallic gold jumpsuit, which she accessorised with matching chandelier earrings, bracelets and rings. Speaking about working with Harris Reed for the outfit, Iman told Vogue: "He approached me, and then he sent me this drawing, which ... I fell over.

"I thought it was beautiful because it really felt hopeful, a ray of light after all the darkness we felt. So, I thought this was a perfect outfit for it."

Iman gave birth to her and David Bowie's daughter, Alexandra Jones, in 2000 - eight years after they wed in 1992.

Iman also has daughter Zulekha Haywood, 43, from a previous marriage with Spencer Haywood.