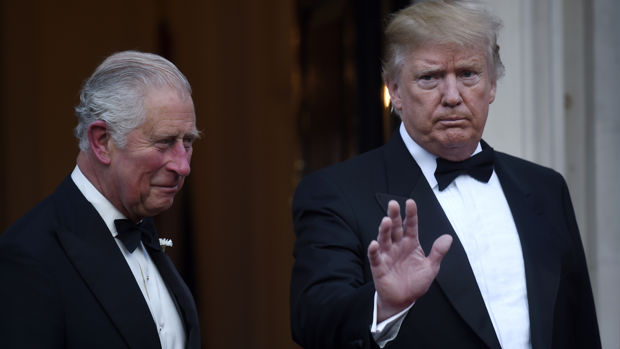 He may have spent all of last week in the presence of Prince Charles and Queen Elizabeth II, but it appears Donald Trump didn't pay much attention to the future king's official title.

The US President, who is prone to misspellings on his social media account, embarrassingly botched the spelling of Charles’ official title today, referring to him as the "Prince of Whales."

The Internet remembers things better than you do. pic.twitter.com/P9hb3bOYwq

Yes, "Whales" as in the sea mammal.

Twitter immediately had a field day with Trump's comments, with Prince of Whales trending on the social media site, which led the 72-year-old to delete the tweet and replace it with the proper spelling; Prince of Wales.

READ MORE:
• Melania Trump channels Princess Diana with chic outfit during visit with the royal family
• Fans are convinced Kate Middleton's tiara at the State Banquet was a subtle dig at Donald Trump

Today's tweet isn't the first time Trump has made headlines for sloppy spelling.

He’s previously misspelt "heal" as "heel" and "honored" as "honered".

He also misspelt the name of Republican Karen Handel during the special election for Georgia’s sixth congressional district.