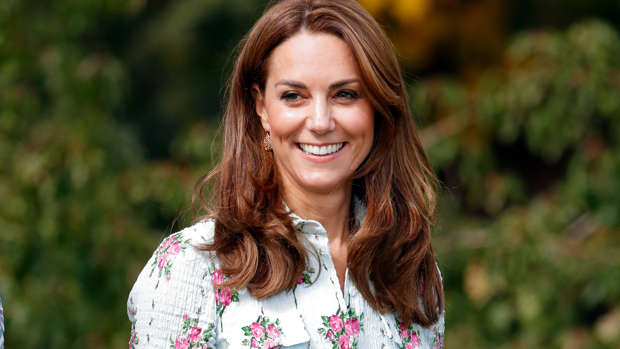 It seems Prince Louis has inherited his mother Kate Middleton's love for the outdoors!

During a surprise appearance yesterday, to open her Back to Nature play garden at the Royal Horticultural Society's garden at Wisley which she designed as part of her campaign to encourage kids to play outside, the Duchess of Cambridge shared a new revelation about her youngest son while chatting to fellow mum Sarah Griffiths.

According to Sarah, who is mum to 15-month-old daughter Matilda, the 37-year-old royal told her Louis is the happiest when outdoors, smelling flowers.

The experiences we gain during our earliest years influences who we become as people. They influence how we interact in school, in work and in society and, ultimately how we bring up our own children. Whether it is planting 🌳 exploring 🔍 digging ⛏ creating 🎨 or playing; quality time spent outside provides children with the perfect environment to form those positive relationships with the people in their lives and the world around them. There is a well-known proverb – that it takes a village to raise a child – everyone here represents an integral part of that very village. By coming together, having fun, learning and experiencing new things, we can all impart life-long benefits on our children. The Duchess of Cambridge, at the #BacktoNature festival at @rhswisley 🍂 which celebrates the value of communities to our wellbeing and marks the culmination of the RHS garden project. 🎥 Footage courtesy of @the_rhs

"She was just saying that her little boy Louis loves to smell flowers and he enjoys being in the garden," she explained.

While it has been a couple of months since royal fans last got a glimpse of the youngster - who was born on April 23, 2018 - according to sources, the littlest royal is a very "happy" baby.

Given Kate's love for nature, her kids' liking to be in the outdoors does not come as a complete surprise.