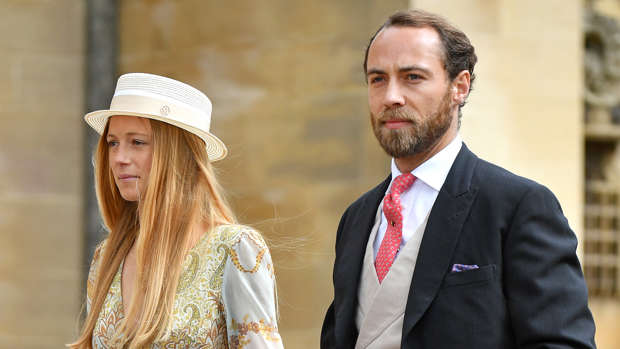 James Middleton is officially off the market!

The 32-year-old entrepreneur and younger brother of Kate and Pippa Middleton took to social media over the weekend to announce the exciting news he popped the question to his girlfriend, Alizee Thevenet.

Alongside a photo of him and his fiancée at Lake District in northwest England, James wrote: "❤️She said OUI ❤️."

❤️She said OUI ❤️ . Our secret is out but we couldn’t be happier to share the news 🥂🍾 #jalizee 🇬🇧🇫🇷

"Our secret is out but we couldn't be happier to share the news #jalizee."

In the photo, Alizee can be seen wearing a large sapphire ring surrounded by tiny diamonds - which looks similar to his sister Kate's famous engagement ring, which once belonged to Prince William's late mother Princess Diana.

The couple has reportedly been dating for just over a year, after meeting at a bar in London.

They were spotted kissing during his family's Christmas getaway to the Caribbean island of St Barts earlier this year.

Alizee is a keen skier who speaks four languages, thanks to her time spent in countries including Chile, Indonesia and Belgium while growing up.

She moved to Britain six years ago and has a masters degree in investment and finance from Queen Mary University of London.

While details are slim at this point about the couple's plans for a wedding, we're keeping our fingers crossed that Prince George, Princess Charlotte, and Prince Louis will play a role in the celebration!