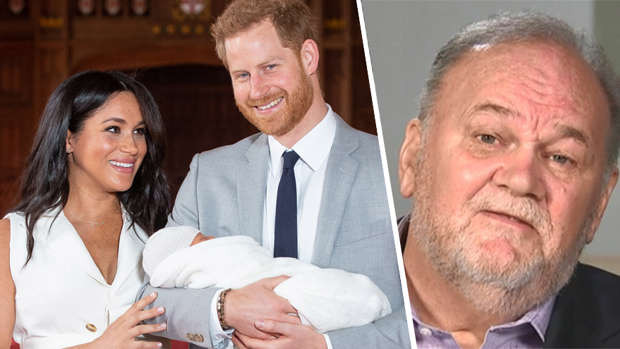 It seems no royal event is complete without Meghan Markle's estranged father Thomas Markle creating unnecessary drama for the Duchess.

And baby Archie's christening last weekend is no different.

In a new explosive interview with The Daily Mail, the 74-year-old former lighting director has hit out after he wasn't invited to the Duke and Duchess of Sussex's son's private christening, while Meghan's mother, Doria Ragland, was in attendance.

"I have been asked if I would have liked to have gone to Britain to see my new grandson being christened," Thomas said.

"I was an altar boy at age 12, a confirmed member of the Queen's church at age 14, and Archie is my new grandson, so of course I would have enjoyed being there for the blessing, wishing Archie and his parent's health and happiness."

READ MORE:
• Royal biographer reveals what Princess Diana would have really thought of Meghan Markle ...
• Kate Middleton is now being slammed for her Princess Diana tribute at baby Archie's christening

According to reports, a total of 25 guests attended the intimate affair.

The 37-year-old former actress has been estranged from her father since he famously skipped her and Prince Harry's wedding last May amid fallout stemming from the staged photo scandal and him repeatedly speaking about the Sussexes to the press.

Meghan later sent her father a handwritten letter begging him to stop speaking to tabloids — which he later released to a tabloid, allegedly to clear his name after he'd felt wronged by several of her friends who'd spoken about their difficult relationship in the media.