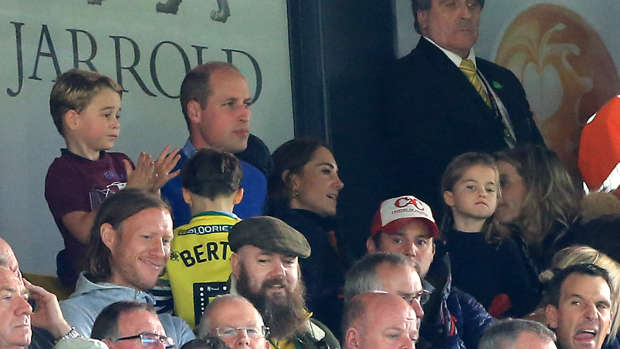 He may be the future King of England, but Prince George really is just like any other six-year-old boy ...

Especially when it comes to soccer!

The entire Cambridge clan - minus Prince Louis - made a surprise appearance to cheer on Prince William's favourite soccer team, Aston Villa, against Norwich City over the weekend. But all eyes were on George.

Wearing the claret and blue colours of Aston Villa Football Club, the young royal proudly punched the sky from the stands as his football team celebrated a 5-1 win over Norwich City.

In an adorable video shared to the official Kensington Royal Instagram account, the third in line to the throne can be seen joyfully cheering during a "fantastic performance from Aston Villa".

There's no doubt George is taking after his father, William, who is an avid supporter of Aston Villa and has supported them since his school days too. The oldest Cambridge child also had a soccer themed birthday party when he turned six earlier this year.