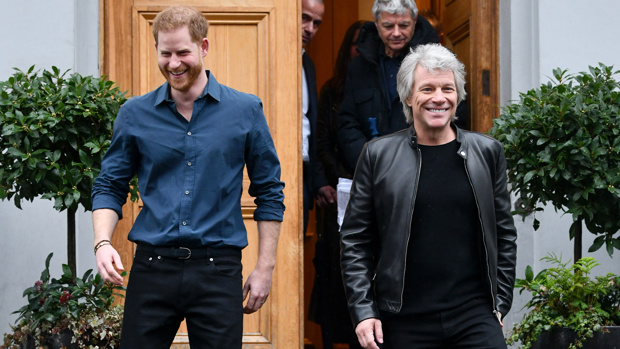 It's a collaboration we never imagined would happen, but Prince Harry has joined forces with rock star Jon Bon Jovi — and it's all for a good cause!

Over the weekend, the Duke of Sussex — who recently decided to step down as senior members of the royal family — joined Bon Jovi at Abbey Road Studios in London to record the 57-year-old singer's single 'Unbroken' with the Invictus Games Choir - which is set to be released in support of Harry’s Invictus Games Foundation.

But you know you can't visit Abbey Road and not take your own version of The Beatles’ famous crosswalk photo!

So during their time together, the duo attempted to do their best impressions of John Lennon, Paul McCartney, Ringo Starr and George Harrison when they stepped outside with members of the choir and participants from the previous Invictus Games.

Bon Jovi took Starr’s spot in the famous photo, while Harry was placed at the back in Harrison's original position.

The dad-of-one — who Bon Jovi joked was nicknamed the "Artist Formerly Known as Prince" — was all smiles despite the drama surrounding his impending official exit from the royal family.

Testing, testing🎙… • Recorded inside Abbey Road Studios, home to The Beatles and other music legends, The Duke of Sussex joins Jon Bon Jovi and the Invictus Games Choir for a special live session in aid of the Invictus Games Foundation. The song being played, called ‘Unbroken’, was created by Jon Bon Jovi to shine a spotlight on those veterans living with Post Traumatic Stress Injury (PTSI), to honour their service and acknowledge the strength of the Armed Forces community. The Duke and JBJ are both strong supporters of the military community, with The Duke founding the Invictus Games in 2014. The Invictus Games Choir, made up of wounded, injured and sick veterans and serving personnel from all services and different ranks of the UK Armed Forces, have come together to use the power of music to aid their recovery. Although The Duke was unable to sing, leaving the vocals to the professionals, the special single that was recorded in Studio 2 where The Beatles recorded 11 out of their 13 albums, and will be released in March in support of the @WeAreInvictusGames. Video © SussexRoyal