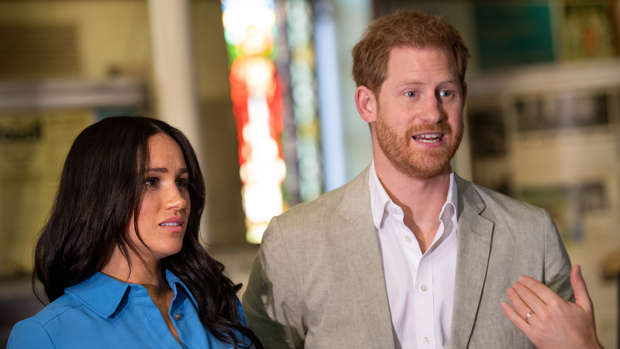 Last week the Queen dropped a massive bomb on Prince Harry and Meghan Markle ... and it appears the couple aren't very happy about it.

As well as giving up their HRH titles for work purposes and abandoning official appointments and patronages – including Harry's military roles – the Duke and Duchess of Sussex must now drop their "Sussex Royal" name after deciding to step down as senior members of the royal family.

Following lengthy and complex talks, the Queen and senior officials agreed it was no longer tenable for the couple to keep the word "royal" in their branding.

Over the weekend the Sussexes took to their website to release an extraordinary statement in which they said they would agree to drop the word royal, before bitterly adding however that the Queen does not own the word internationally.

"As The Duke and Duchess will no longer be considered full-time working members of The Royal Family, it was agreed that use of the word 'royal' would need to be reviewed as it pertains to organisations associated with them in this new regard," the statement read.

"While there is not any jurisdiction by The Monarchy or Cabinet Office over the use of the word 'royal' overseas, The Duke and Duchess of Sussex do not intend to use 'Sussex Royal' or any iteration of the word 'royal' in any territory (either within the UK or otherwise) when the transition occurs Spring 2020."

The couple also outlined in terse words how they "will continue to require effective security to protect them and their son," although it is not clear who will pay for it.

The statement continued: "It is agreed that the Duke and Duchess of Sussex will continue to require effective security to protect them and their son.

"This is based on the Duke's public profile by virtue of being born into the royal family, his military service, the Duchess' own independent profile, and the shared threat and risk level documented specifically over the last few years.

"No further details can be shared as this is classified information for safety reasons."

Royal commentator and former Editor of International Who's Who, Richard Fitzwilliams, told the Daily Mail that the statement was "completely unnecessary" as it "underlines their differences with the palace in a way that is avoidable."

"The idea of putting out a statement which agrees that they can't use the word royal but contradicts the idea the monarchy can stop them using it," he said, "they're basically saying the royals can't stop them using it, but they won't be using it".

"It has been especially unnecessary to underline it in this way. The tone they've taken is that they are unhappy, they've made it clear every step of the way."

The couple's lives as working royals will end on 31 March when they stop representing the Queen and become financially independent.

Following their decision to step down, the Duke and Duchess will need to rebrand their Instagram account, which uses the name SussexRoyal, as well as the website they recently spent tens of thousands of pounds on.

The pair quit the royal family this year to start a new life together in Canada with their son Archie.