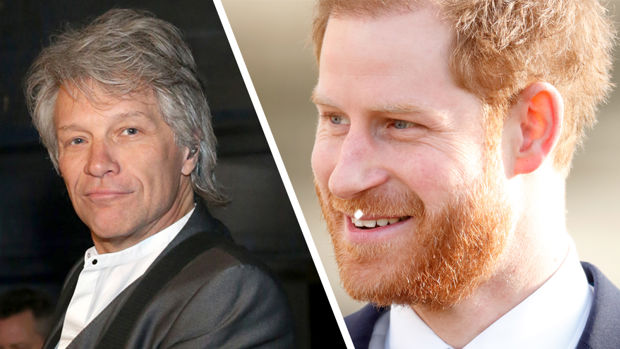 It's a collaboration you probably never imagined would happen, but Prince Harry is joining forces with rock star Jon Bon Jovi — and it's all for a good cause!

Next week, the Duke of Sussex — who recently decided to step down as senior members of the royal family — will join Bon Jovi at Abbey Road Studios in London to record 57-year-old singer's single 'Unbroken' with the Invictus Games Choir, which will be released in support of Harry’s Invictus Games Foundation.

To tease the forthcoming collaboration, Harry took to Instagram to share a hilarious fictional text exchange between the pair.

Alongside a video which appeared to show Bon Jovi messaging the Duke, the dad-of-one teased: "Coming soon...#WeAreInvictus".

Coming soon... #WeAreInvictus • *Disclaimer - this is not a real text conversation*

The Queen's grandson - referencing one of the star's famous songs - replied: "I'm good! Just livin' on a prayer...What's up?"

Bon Jovi continued: "I'm in London on 28th of February and have an idea...#Invictus."

Harry wrote: "Nice! Is it you and the band?"

The rock star responded: "Just me for now, but don't worry - I've got some back up that I think will work."

To finish, Harry made another reference to one of his hits: "Ha! Don't expect me to sing...BUT I'll give it a shot!"