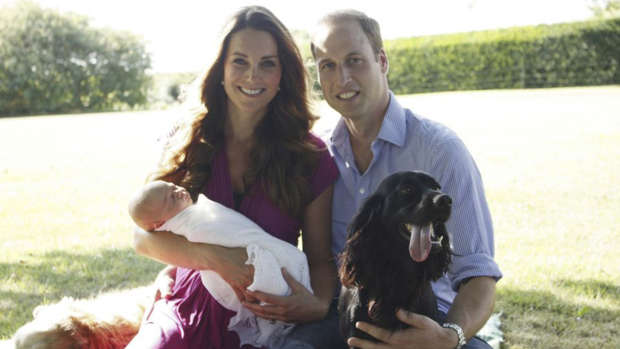 Just days after the royals were celebrating the joyous 73rd wedding anniversary of Queen Elizabeth II and Prince Philip, tragedy has struck the Cambridge family.

Alongside a photo of the beloved family pooch, the couple wrote: "Very sadly last weekend our dear dog, Lupo, passed away.

"He has been at the heart of our family for the past nine years and we will miss him so much. - W & C."

Lupo was part of a litter born in 2011 to Ella, the dog of Catherine's parents Carole Middleton and Michael Middleton.

The Duke and Duchess of Cambridge welcomed the puppy to their Kensington Palace home that Christmas, eight months after their royal wedding.

The spaniel often appeared in photos alongside the family, and the couple's eldest son, Prince George, was particularly fond of the black pup.

"It is with great sadness that Lupo, the beloved dog of my sister Catherine and her family has passed away," James shared on his Instagram. "Lupo was the son of Ella, brother to Zulu, Inka & Luna. He was 9 years old."

"Nothing can ever prepare you for the loss of a dog," he continued. "For those who have never had a dog, it might be hard to understand the loss. However for those who have loved a dog know the truth: a dog is not just a pet; it is a member of the family, a best friend, a loyal companion, a teacher and a therapist. Many people over the years have reached out to me about the pain of losing a dog and for most, the loss of a dog is, in almost every way comparable to the loss of a Human loved one [sic]."

James continued, "The pain I felt from losing my first dog Tilly back in 2017 still hurts and on hearing the news about Lupo brought a wave of emotions flooding back [sic]. There isn't much of a rule book on how to grieve for a dog, but I've said a prayer, lit a candle and taken Ella (Mum) for a long walk to spend time remembering Lupo. Rest in peace Lupo. Tilly & Mini will be waiting for you. You will always be remembered and your legacy will live on forever. Good Boy."

Our thoughts are with the Cambridge family.