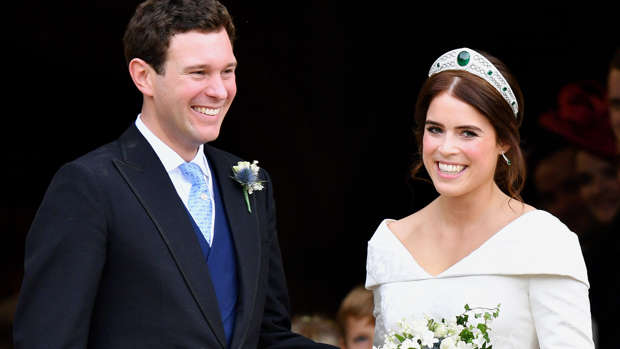 Can you believe it has already been a whole year since Princess Eugenie walked down the aisle to exchange vows with Jack Brooksbank?!

The 29-year-old royal tied the knot with the 33-year-old Casamigos ambassador at St George's Chapel in Windsor Castle on October 12, 2018, and in celebration of their first wedding anniversary, Eugenie shared the couple's official wedding video - which includes a shot of their first kiss as a married couple.

Taking to social media to share the clip, Eugenie wrote: "This was the greatest day of my life...forever and always! Happy one year anniversary, my Jack!!"

Of course, Eugenie's arrival was one of the biggest moment from the wedding, with the royal bride looking stunning in a white dress designed by Peter Pilotto and Christopher De Vos, which featured a low back to show off her scoliosis surgery scar, something she has been helping to raise awareness of over the years.

This was the greatest day of my life...forever and always! Happy one year anniversary, my Jack!!

Princess Eugenie's sister Beatrice served as her maid of honour, whilst Jack's best man was his brother Thomas.

And joining Prince George as pageboy was Louis de Givenchy.

The couple's marriage was watched by around 1,200 members of the public, who were selected by ballot to listen to a live broadcast in the castle grounds, whilst thousands more lined the streets of Windsor to watch the procession outside.

Congratulations to the happy couple on their first wedding anniversary!