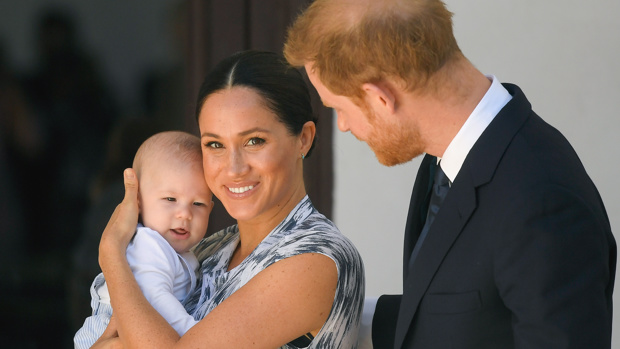 The Duke and Duchess of Sussex have closely guarded their newborn son since his birth at the beginning of May.

But now royal watchers are absolutely delighted that little Archie has finally made his first official public appearance, joining his mum and dad as they head out on their tour of Africa.

Meghan Markle and Prince Harry made a surprise appearance with their adorable five-month-old son at their meeting with South African anti-apartheid activist Archbishop Desmond Tutu at The Old Granary in Cape Town.

For his visit, the royal tot was dressed in striped overalls, a white shirt, and white socks - and his resemblance to Harry is undeniable, especially when looking at the young prince in similar dungarees during his appearance on Princess Diana and Prince Charles's royal tour of Italy in 1985.

During the meeting, the Duchess bounced her smiling son on her knee while Harry played with Archie's toes.

The seventh-in-line to the throne, who is starting to grow tufts of reddish hair, also clung to his grinning mother as the couple got up to say their goodbyes to the Archbishop.

The Sussexes took to Instagram after the appearance to share a video in which Meghan can be seen holding Archie as the family of three entered The Old Granary.

The visit marks the first time the couple have brought Archie into full view since his birth on May 6, 2019.

This is the last of the couple's joint appearances in South Africa before Prince Harry departs for Botswana.

Then Harry will travel to Angola, to pay homage to the work of his late mother Diana, who campaigned for landmines to be outlawed during a visit she made to the country in 1997.

The family will be reunited in Johannesburg for the last leg on their trip.