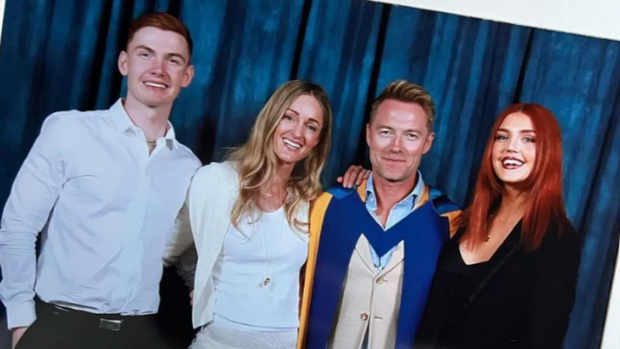 It has been 24 years since Ronan Keating lost his mother following a long battle with breast cancer.

And in a poignant tribute to his late mum Marie, the Boyzone star took to social media to share a heartwarming message as he was awarded a doctorate from the Open University to recognise his work in philanthropy and music.

Posting on Instagram, Ronan shared a family photo of himself with his wife Storm and his kids Missy and Jack from the ceremony.

In the picture, the Dublin native was wearing a graduation robe as he posed between his wife and daughter.

Alongside the post, he wrote: "I can’t explain my gratitude to @theopenuniversity for honouring me with a doctorate for my work in philanthropy and music.

"Humbled is an understatement. What a day celebrating over 300 graduates and their hard work. So lovely to have Storm, Jack and Missy by my side as well as my pal and manager, Mark, who has always been there for me."

The 'Life Is A Rollercoaster' hitmaker then added: "Mum I kept my promise X."

After Marie's death in 1998 at the age of just 51, Ronan and his siblings created the Marie Keating Foundation to spread awareness on the disease, inform people of the importance of detecting cancer early and supporting those battling cancer.

Your mum would be so proud Ronan.