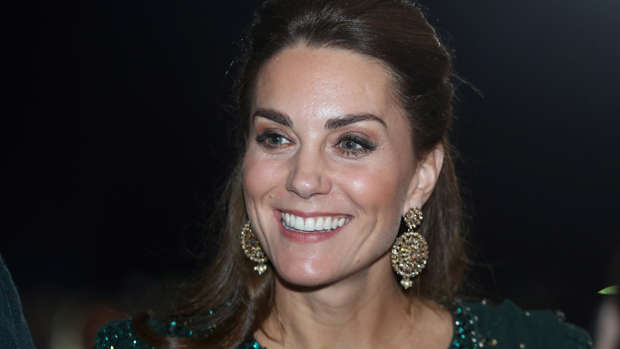 Kate Middleton has continued to wow royal fans with her latest stunning ensemble.

All eyes were on the Duchess of Cambridge as she attended a reception hosted by the British High Commissioner to Pakistan as part of her first official five-day tour of the Islamic country with her husband, Prince William. The floor-length gown feature billowing sleeves gathered at the cuffs. The Duke and Duchess of Cambridge's arrival marks their first visit to the country, also making them the first royals to visit the troubled nation for 13 years. The visit was arranged at the request of the Foreign and Commonwealth Office, due to political tensions and security concerns in the region.

However, due to a recent a bombing outside a shrine in central Lahore and an attack by armed militants on the Pearl Continental Hotel in Gwadar, Balochistan, the palace has made the decision to keep details of the Duke and Duchess's engagements undisclosed until the day. The couple is expected to meet government leaders, significant cultural figures alongside those who run programmes aimed at empowering young people.

The tour also hopes to strengthen ties between the UK and Pakistan.