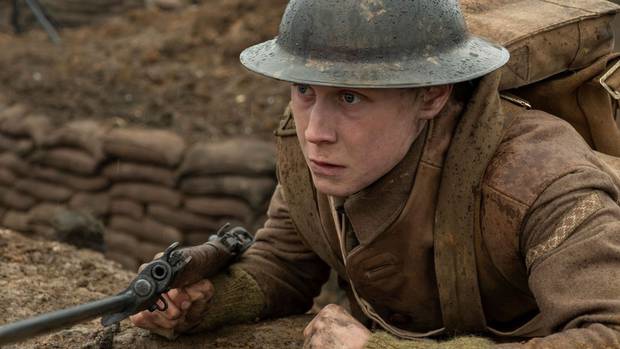 After the success of World War II epics Band of Brothers and Dunkirk, it was only a matter of time before World War I got the big-budget, cinematic treatment. And 1917 doesn't disappoint, says Des Sampson.

With a cast including Oscar winners and big-name stars like Colin Firth, Benedict Cumberbatch, Richard Madden and Mark Strong, you'd expect 1917 to be a startling colossus. It is, in many ways, but not necessarily for the reasons you'd expect.

Firstly, all of its big-name stars are bit-players, confined to cameos or fleeting interludes. Conversely, its two leads - George MacKay, who shines as Lance Corporal Schofield, and Dean-Charles Chapman, as Lance Corporal Blake - are relative unknowns. There's a good reason, though, as renowned director Sam Mendes told the Herald in London.

George McKay and Benedict Cumberbatch in a scene from 1917.

"When you go to [French World War I battlefield] the Somme, you're struck by all the unmarked graves – the unknown soldiers," he murmurs, solemnly. "We wanted to pay homage to them, so we decided the movie should be about two ordinary boys who are thrust into an extraordinary situation. What's more, we didn't want any prior preconceptions between the audience and them, so we decided to have two 'unknowns' as the focus of the movie, rather than established stars."

The gamble pays off handsomely, with MacKay and Chapman delivering stellar performances. Equally risky, for Mendes, was his decision to make 1917 a war movie which doesn't, ostensibly, feature a battle scene.

"That was intentional too," admits Mendes, who based the film of stories told to him by his grandfather, who fought on the Western Front from 1916 to 1918.

"We're very aware it isn't a combat movie and there's not a great deal of bloodshed. But it still bears witness to the most mighty devastation and chaos, so I think you come out from it shaken and unable to look away."

He's right. There are myriad, unrelenting moments in 1917 highlighting the brutal, futile realities of war, its death, destruction and decay. One such scene is when Blake and Schofield set off on a terrifying mission to traverse eight miles of treacherous no-man's land to deliver an urgent message to call off a doomed pre-dawn attack. As they clamber up a body-strewn slope, Schofield stumbles and thrusts out his hand to steady himself – only to find he's sunk it into the remains of a fellow soldier.

"That scene was horrific," recalls Mackay, shuddering. "When I read the script, the notes said; 'he puts his hand through his back, which is the consistency of camembert.'

"Immediately you know what that looks and feels like. What's worse, that passage was lifted from a real, first person's account!"

It's just one moment of many where the brutality of war hits home hard. It makes for compelling, harrowing viewing, with the minutiae of life and death juxtaposed to traumatic, terrifying effect.

What makes 1917 even more realistic is how it was filmed, with Mendes taking the brave, bold decision to shoot the film in real time, largely in sequence, in an (almost) "one-shot" take – a concept that initially filled celebrated cinematographer Roger Deakins with dread.

"I actually thought it was a typo, when I first read that," he admits, laughing. "I couldn't understand the rationale – until I saw the script. Then I realised why it had to be done that way."

Mendes' audacious approach is designed to immerse audiences in the film, so they feel like they're experiencing the catastrophe and camaraderie, the horror and heroics, firsthand.

It's a highly effective, engaging conceit, with some episodes so realistic it feels like you're in the trenches, among the terror. But with scenes up to nine minutes long, it wasn't always smooth sailing, as you'd expect.

"It would always be the smallest of things that would go wrong and ruin it, like a rifle slipping off your shoulder or your water-bottle getting snagged on something seven-and-a-half minutes in! That was frustrating, obviously," recounts MacKay. "But when something went wrong, we just pushed on and completed it. Anyway, those mistakes made it more realistic, more authentic."

So too did MacKay and Chapman largely doing their own stunts, undertaking gruelling, army training, spending months in rehearsal and weeks in muddied trenches.

"Filming in no-man's land was a tough because the conditions weren't dumbed-down, to make it easier," explains Chapman. "The mud was so slippery; it was like ice. On top of that, I developed shin splits, so not being able to walk properly because of the mud, my injury and all the gear we wore, was hard. But it was nothing compared to the men who actually fought there."

Their commitment and determination make 1917 believable, especially as you follow their mission and wonder if they'll complete it in time, or die trying. It's a sense of menace that seeps and creeps through every minefield they navigate, every enemy trench they stumble upon and every ridge they scale.

The upshot is a brilliant, bruising encounter, full of foreboding, but ultimately uplifting. On Monday it won best drama film and best director at the Golden Globes, often a reliable pointer to Oscar glory. And rightly so. It's one of the most compelling, epic and enthralling masterpieces ever to emerge from the chaos, carnage and cacophony of war.