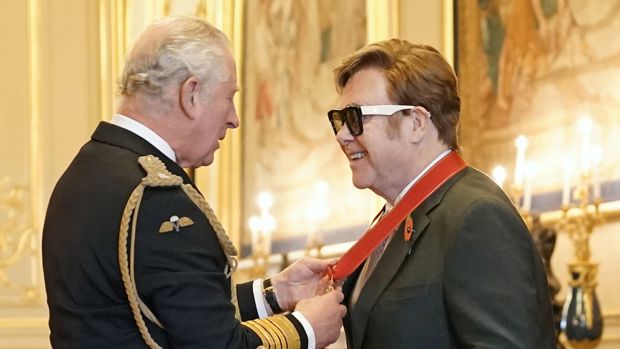 He's had numerous hits, awards and even a knighthood to his name ... and now Sir Elton John can add member of the Order of the Companions of Honour to his long list of accolades.

Supporting himself with a walking stick due to a hip injury, the 74-year-old singer received the prestigious honour from Prince Charles during an Investiture Ceremony at Windsor Castle in recognition of his glittering career in music and campaigning work on Aids.

He marked the moment by sharing photos from the ceremony on Instagram, thanking Prince Charles for the honour.

"An incredible honour to be made a member of the Order of Companions of Honour today in acknowledgement of my services to music and the fight to end AIDS through @ejaf," John captioned the post.

"Thank you to the Prince of Wales and @clarencehouse for your recognition and support."

It is one of the highest awards that can be bestowed by Charles' mother, Queen Elizabeth II, to citizens in Britain and across the Commonwealth.

The Order of the Companions of Honour was established by George V in 1917, with only 65 people being able to hold it at anyone time.

The 'Your Song' hitmaker joins the likes of Sir Paul McCartney, Dame Judi Dench and Sir David Attenborough in the order, and the 95-year-old monarch herself.

The 74-year-old, who was knighted for services to music and charity in 1998, has sold more than 300 million records worldwide during a pop career spanning more than five decades.